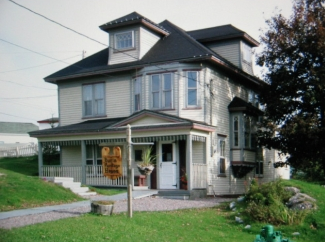 The Burin Heritage Tourism Association consists of a Heritage House Museum, also known as the Reddy House, and a museum in the Bank of Nova Scotia building. On the premises we also have a Craft Shop for local goods, and By the Rock Cafe with traditional Newfoundland cuisine, and an Oldest Colony Trust Building which is used for our Wednesday night entertainment & events.
Experience the rich culture and history of a seafaring people, nestled in the hills overlooking the ocean, the scenery is spectacular.

The Burin Heritage Tourism Association has a craft shop on the first floor of the Bank of Nova Scotia Museum, and the Bank Vault, the second floor has a Mariners room and the Tilde Wave Display, war room, and school room, third floor has a typewriter room, Tool Room and sports room.

Reddy Heritage House once one by the Reddy Family has a outport kitchen, parlor, dining room, sewing room bedrooms and the Cottage Hospital Exhibit.

The Oldest Colony Trust Building was once a cold storage facility, Exhibit are the art work of Burin during 19th century, also a board walk and the place where the Burin Heritage Tourism Association holds its Wednesday Night Entertainment.

Oldest Colony Trust Building
Hours, June To September we have our Wednesday Night Entertainment from 7pm to 9pm with local entertainment

Your ticket for the: Burin Heritage Tourism Association