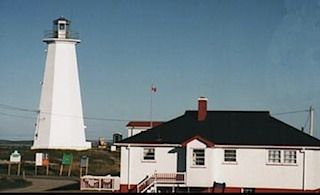 The third in a series of lighthouses at Cape Ray, this structure was established in 1871 to serve fishers and sailors along this part of the French Shore from the hazards of the rocky shoreline. Although no visitors are permitted in the automated lighthouse, visitors may visit the on-site interpretation centre to view artifacts which represent the site’s intriguing pre-history and history. The centre is home to an exhibit showcasing the Paleo-Eskimo First Nation Group who once made their home at the Cape between 1900 and 1200 years ago. Artifacts include endblades, knives, scrapers, side scrapers, and microblades which were excavated at the site. The centre also showcases the sites communications history, as the site of an underwater telegraph cable which connected Nova Scotia to Newfoundland in 1856. The site’s military history is also featured at the site, having been occupied by Canadian military during both World Wars.

Your ticket for the: Cape Ray Lightkeepers House