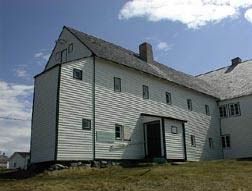 According to 18th century map makers, Hopedale was formerly called Agvituk Bay, which in the Inuktitut language means “a place where there are whales”. The Moravian Missionaries first established a station in Hopedale in 1782. The Museum is located in the Moravian Mission House – a building attached to the church, which housed the ministers and their families. The Museum’s collection consists of archaeological artifacts which date from between 1500 to 2000 years ago, including others relating to today’s Labrador Inuit as well as European medical supplies, furniture and utensils. The mission is the oldest wooden structure east of Quebec. Other structures include a church, a storehouse, and small wooden boats which the First Nations peoples of the area once occupied.

Your ticket for the: Moravian Mission Museum