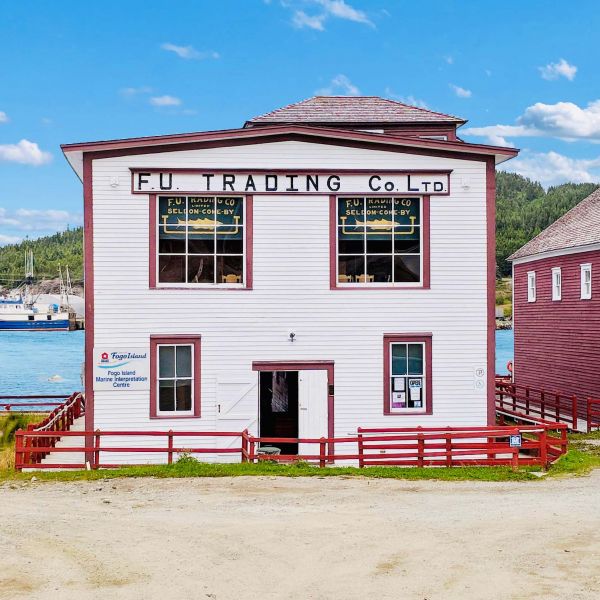 The Fogo Island Marine Information Centre is located in Seldom on Route 333, a 10 minute drive from the ferry terminal at Man O’War Cove. If travelling by boat it is located off the northeast coast of Newfoundland on the main shipping route to Seldom. Seldom has a natural deep water port with easy access. The harbour has a water depth ranging from 3-9 fathoms deep.

Come and experience one of the most diverse bird colonies in the Northwest Atlantic through presentation and display – The Funk Islands and the now extinct Great Auk.

We offer docking for yachts and other leisure boats, as well as a by-the-sea picnic area, local craft store, laundry, public shower facilities and wireless internet.

Fisherman’s Union Trading Company Limited
White Retail Store
The Fishermen’s Union Trading Company was formed in 1909 by William F. Coaker. In 1913 a branch store was opened in Seldom Come By. Its purpose was to provide a Co-operative for fishermen.
The “Co-op” funds would be used to purchase supplies in bulk. The supplies would then be sold at the Trading Company at cost so fishermen could buy goods at fair prices. The store operated on a barter system basis – customers would receive winter provisions in exchange for their summers catch of fish.
Eventually new businesses opened operating by cash, thus, leading the customers to shop elsewhere. As a result the Trading Company experienced a decline in customers and closed on May 20, 1978.

Red Fish Store
This building was built over 100 years ago by a merchant, named Duder. The first floor was used to store salt, kerosene and other fuels. Salt was loose and had to be shoveled when needed. Fishermen would come and buy salt to do their own saltbulk fish.
Fishermen would ship their dried salt fish to the store and then it would be culled into different grades. The fish would be packed in barrels and stored on the second floor for schooners to pick up and carry to other markets. Most commonly known boats were the Swile and the Young Hood.

Cod Liver Oil Factory
Fishermen would keep the cod livers from their fish, store them in drums and then sell them to the merchants. It would then be placed in large tanks and boiled so that the oil would render out and the waste would settle to the bottom. The oil would then be stored in two 5,000 gallon holding tanks in preparation for shipment to U.S. destinations.

The Fogo Process
In the 1950s and early 1960s Fogo Island witnessed a serious decline in the cod stocks, causing fishermen to quit fishing and merchants to close shop. The future of Fogo Island was beginning to look very bleak.
Premier Joseph Smallwood met with Fogo Islanders and presented them with three choices… 1) resettle; 2) drift and perish; or 3) develop. The residents responded… they wanted to stay.
Residents then for

Your ticket for the: Fogo Island Marine Interpretation Centre