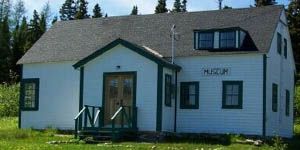 Constructed in 1915, the structure was once part of the Moravian Mission station which was established in Makkovik in 1896. The building was meant to serve as a boarding school, however, it seemed more prudent to house the school and the dormitory within the Moravian manse. Since the building required regular maintenance but had no real function, it became referred to as the “White Elephant” and the name stuck. . Through numerous artifacts, the museum showcases the structure’s history, such as a dispensary, midwifery clinic and most recently as a place of lodging for families traveling between communities in the region. The Moravian presence in the community is also profiled through such artifacts as mission diaries, family bibles and texts written in both English and Inuktituk. Various European and Inuit occupational artifacts relating to fishing, trapping and hunting tools and implements are also displayed, as well as domestic artifacts such as kitchen utensils. The White Elephant Museum was designated a Registered Heritage Structure on December 2nd, 2000, by the Heritage Foundation of Newfoundland and Labrador.

Your ticket for the: White Elephant Museum