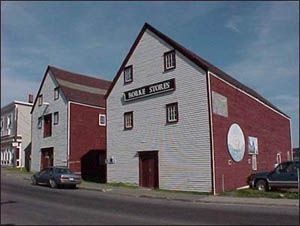 Located across the street from the historic Rorke Stone House, the Rorke Stores served as a major commercial centre for the town of Carbonear for over 100 years. Construction on the Stone House started in 1860. Both stores across the street were built in the 1870’s and remained in use until 1978 when the Rorkes ceased operations. The East store, circa 1871, blew down in a wind storm in 1999. The West store was locally known as the Molasses Store. It was donated to the town of Carbonear and was designated an historic building in 1988 by the Newfoundland and Labrador Heritage Foundation. The top floor of both buildings were originally used as sail makers’ lofts.

The remaining building now houses the “Balancing The Scales” exhibit and a small theatre upstairs in the “The Loft”. The exhibit tells the story of the Rorkes operation in Carbonear and with the Labrador fishery in Venison Islands.

Your ticket for the: Rorke Store Museum