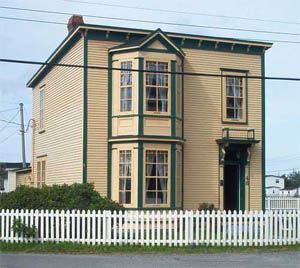 The O’Reilly House was built in 1902 as a residence for William O’Reilly. In the 1940s, it became a government-owned residence for the local magistrate, and filled that role until 1984. In 1986, it was turned over to the Placentia Area Historical Society for development as an area museum. As a museum the O’Reilly House reflects over 450 years of a diverse history for the Placentia Area. Displays tell of the role that the Basque, French, English, Irish and Americans played in that history. Apart from period furniture and an old style kitchen to remind us of the early days of the house there are many photographic displays to help us recall earlier periods. There is a special exhibit of the resettlement of Placentia Bay and items related to notable citizens. Models of former community buildings and many artefacts further enhance the story. See such things as a tipstaff presented by King George III in 1772, a silver tea set used by Prince William Henry while visiting Placentia in 1786, and a Basque Will that is the oldest original civil document from Canada.

Your ticket for the: O’Reilly House Museum