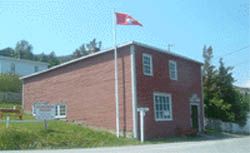 The Green Family practiced as blacksmiths in Trinity since before 1750. The death of John Green is recorded in the Church records for 1764. The present smithy was built between 1895 and 1900 and was last in use in 1955. This building is unusual for that era as it is 30 feet wide, 50 feet deep and 25 feet high with a second storey only along the front of the structure.

1999 marked the year that the forge became fully operational again, this was the first time in over forty years that a fire had been lit in the forge. A blacksmith was hired and demonstrations in the manufacturing of items were conducted. The forge has become one of the must see historic sites in the town and has begun production of a variety of items for sale such as fireplace pokers, two types of letter openers, roasting forks, candle holders, coat hooks, sign brackets, hinges and planters.

Your ticket for the: Green Family Forge